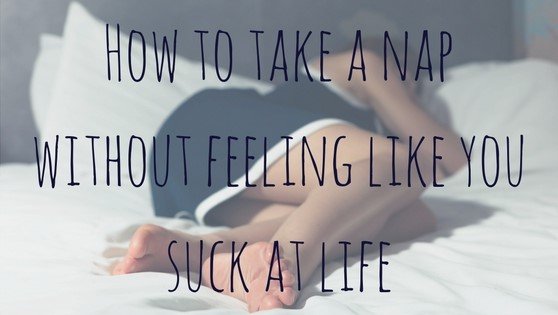 There is a lot of information out there about napping and it’s confusing.  There are power naps, certain rules on the best amount of time to nap, when to nap, if we should even nap at all!  It’s honestly, too much for me to handle.

While everyone is proposing the new and latest best way to nap (or not nap) I’d like to address a helpful tip that honestly, has nothing to do with napping, but can make all the difference.

First of all, I don’t really give a shit if you nap for 10 minutes or if you nap for 3 hours.  Do whatever your little heart desires to do.  The catch is when you wake up.

When you wake up from a nap are you saying:

“That was a complete waste of time”

Now you feel like shit.  Right? Of course you do you just berated yourself for listening to your body and doing what it needed to do.  You have now likely undone any benefit of your nap because you are in a negative mental space.

When we feel like shit we are more likely to say, “oh man I slept 47 minutes.  I should have either slept 20 or 90 according to that article I just read online.  That’s why I still feel like crap.”

Well, maybe?  But let’s be honest.  You are probably feeling like crap from all that negative self-talk you just vomited about yourself.  And now you’re running around the house like a mad person pissing everyone off in your path in order to make up for that 47 minutes of lost time in which you probably weren’t going to be productive with any of it anyways because you were too damn tired.

I (hopefully) painted a lovely picture for you.

How to take a kick-ass nap:

Take a nap whenever you want! If your eyelids are drooping and you just “can’t even” take a nap.

If you’re at work… don’t take a nap.  Someone will fire your ass.

If you have a small child who is outside playing… don’t take a nap.  Your kid will get seriously injured, lost, or die.

If you’re driving… don’t take a nap.  Pull the car over first in an area where it is safe to pull your car over…

Hopefully common sense can take over from here.  Otherwise, if you are tired and say “I need a nap right now” and if napping would not cause death or serious harm to yourself or another, or job loss or some other social catastrophe, then go ahead and take a nap!

Now for the real work…..

The real work comes in when you awake from your nap.  The first thing to do is just be mindful of your thoughts and observe them.  If you notice any negative shit floating around then recognize that and challenge the thought.

“I’m not lazy, I work really hard” (maybe even provide an example or two)

“I don’t suck at life, I’m obviously performing so well at it that I needed to take a break for a minute”

“Yes, I’ve got shit to do, but it isn’t the end of the world and now I feel better and have more energy to be productive.”

Just like magic that nap was suddenly a grand idea, you’re not beating yourself up, you are refreshed and ready to tackle the rest of the day.  Maybe even with a smile 🙂