Gaining direction and organization in the New Year 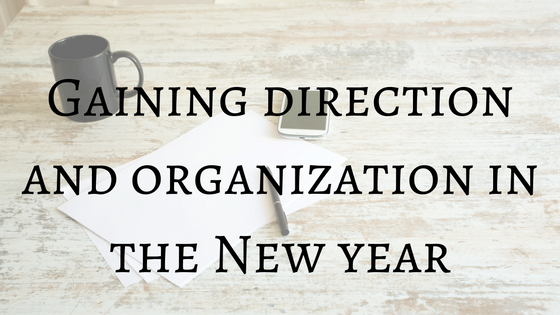 The past few years I’ve been working on becoming the master of my own self.

When I was younger I learned how to draw and color by looking at other things and copying it. I learned how to paint in a class that told me every step. As a small child, paint by numbers was my jam.

Directions are great. I’m awesome as following directions. My mother was very good at teaching me this and she is doing it with my 1.5 year old daughter who will pick up my empty bag of chips and spontaneously throw them in the garbage.

This skill allowed me to perform well in high in school, graduate with a lot of scholarships and good grades to have money to go to a private school and become “successful” by obtaining my masters degree and doing well on the job.

A few years ago I got into running (again). Training plan, printed it out, did what it said, ran a half marathon. Easy peasy. Overtime the plans stopped working and injuries started. WTF.

“I just want someone to fix this for me.  Just tell me what to do and fix it.”

As I’ve gotten older there have become less and less directions and more gray areas.  My clinical supervisor tells me “well that’s a clinical judgement” or “a clinical call” “based on your assessment” “whatever you think best.”

Well shit, life started getting a lot harder because, lack of directions. No one was telling me what to do anymore. I was now to be the master on my job as a therapist, the master of my body with running. What else am I expected to do?!

Getting back to where I started, the past few years I’ve been working on becoming more intuitive again, and learning and knowing my body, my mind, my craft… playing, doing, knowing, exploring.  It’s been a wild ride!

In getting away from the “directional based” way of living and becoming more the master of myself, some important things went out the window.

Keeping track of stuff… writing things down, numbers, budgets, organization… in order to change I literally threw it ALL out the window.

I have been throwing these skills out the window for years as I’ve become a more “in tune” runner and “in tune” clinician but an out of tune bank account, task list and more.

I want to thank Allison Puryear because I was bitching about how I used to be this organized and goal directed person and now I’m not anymore and she asked a question that I can’t remember what it is anymore but along the lines that sometimes when you try to change one behavior another one goes out the window too. Welp, that’s what happened!

In 2017 I’m going to work on finding my direction and getting organized.

Why am I sharing this with you, you ask?

I also realized that maybe I never really “had” it. I realized that I received direction externally most of my life and it wasn’t until the past year or so that I had less of the external motivation of direction and when I went internally for it, it wasn’t there, because I’ve never worked on it, because I’ve never had to.  So this really interested me as well that I wanted to share. What are things we THOUGHT we were good at or had, but it was really external and not internal?

The great thing about personal growth. You’re never done and there is ALWAYS something to work on. And sometimes it’s really crappy when it’s something you always had, and always identified yourself as having and then wake up to realize that you never really had it all along, it was someone else’s.

Well friends, now it’s time for me to own my direction, get organized and find myself someplace new.