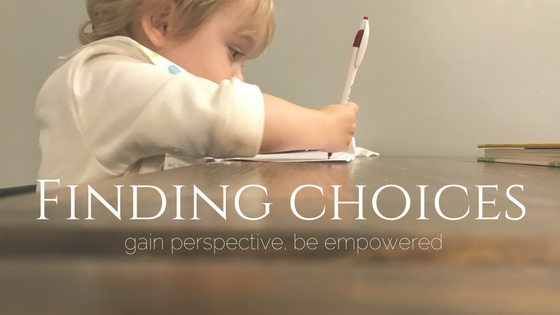 Often times it’s easy to say “I had no other choice.” I say it at times, but deep down I know what I’m saying is not true at all. There are choices all around us and sometimes the answer is so obvious that we perceive it as not being a choice at all; however this perception can often lead us to feel like victims in our own story.

There is a reason why experts recommend that toddlers be given options for them to choose from. Not only is it really good for the developing brain, but it FEELS good to exercise choice. And life is good when a toddler feels good.

I often say “I had no other choice” when I talk about a situation in which I felt crappy, like when I left my agency job. But my victimization is more around my hurt feelings, failed expectations of self and others along with the negative beliefs I started labeling myself with. What I REALLY did was I weighed my options and made the best decision I could, with the knowledge and resources I had in order to build, in my opinion, a better life.

Lets pick another example that may seem less obvious.

“I had no choice I had to eat SOMETHING.” Situations can get a bit tricker. Eat something or starve. Even in this morbid like scenario there was still have choice – just one being better than the other. Maybe for some reason this scenario included someone eating bugs. Most people I know don’t choose to eat bugs, but maybe if your life depended on it, you might choose to eat the bug. It’s not a fun choice. Personally it seems like a pretty shitty choice, but it’s still a choice. And when I see eating bugs as choice my stomach feels a bit smoother and my brain feels more clear compared to when I see a scenario of someone being forced to eat bugs in which there is no choice. My stomach is in knots and I feel physically ill. How could I feel such different ways about eating bugs?

It’s seeing the choice in the matter.

When I watch a scary movie (which I don’t really do), often times the horrific acts bother me, but if I dig deeper, like I did with the bug example it’s seeing people not be able to exercise their choice that is often physically uncomfortable. Lack of choice shakes us to our core and threatens our being.

When I do some of this work with clients it may seem surprising how often people can go from feeling victimized to feeling empowered – by recognizing their choice. Sometimes grief needs to happen as a result of choice and that’s painful and not to be discounted. But recognizing and feeling the choices we made/make provide us with this freedom that is felt physically.

But it doesn’t end there – Self-compassion is essential!

When we recognize that we had choice, it’s important to agree that we made the best choice we could have and did the best we could at the time, given the resources we had. Sure, everything is better in hindsight, but beating ourselves up over knowledge gained later is destined to turn you into a scrooge. Recognizing all the factors that went into us making a choice (even if it was a shitty one) and trusting we did the best we could allows for healing to happen. So finding choice is the first step, but if we beat ourselves up over it healing will never occur, self-compassion is essential.

Is there something in your life that you often say “I had no choice?” How is saying that serving you? How do you feel about that same scenario after finding your choice in the matter? Does it feels different to you? Do you feel the difference in your body?

Is there a decision you’re currently wrestling in your life and you feel victimized? Can you clearly see what all your options are? Are you sitting in your current decision because even though you might not like it, it appears to you, the best decision given your current needs and resources? Even though it may not be ideal, does your choice feel better than the other choices?

I think you get the point here.

Find choice. Trust you’re doing the best you can. We are always still learning. I’ve never seen anyone get better in therapy by staying victimized and beating themselves up. How is that serving you?