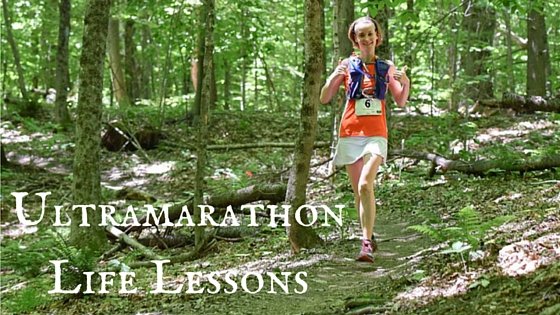 I’ve read a good number of race reports in the recent years as I have gotten more into trail running and longer distances.  I always enjoy hearing about what people learn about themselves on these adventures and generalizable life lessons.  Having just ran my first long distance of that kind, I wanted to reflect on some key points that I was able to take away from my race.

What intrigues me about ultra running is similar to what intrigues me about therapy.  I am fascinated with humans and what we are capable of both physically and mentally.  Being a therapist I get to go on so many journeys of people’s most vulnerable, darkest, intimate, thoughts and feelings and ultra running facilitates vulnerable, dark, intimate thoughts and feelings! Running is just one component in my life that I use to understand myself, life, pain, humans, and internal processes.

Why running and not something else?????  – Because I’m not coordinated. Haha 😛

Without further ado, here are my life lessons learned from running my first ultramarathon:

To make a long story short the course was harder than I expected it to be and I fatigued earlier than I expected I would resulting in feeling defeated sooner than I hoped and the slew of negative emotions that came with it.  I realized the course was harder on the first loop.  I ignored it.  I ignored it so much I ran slightly faster the 2nd loop.  I started to realize I couldn’t keep that up and ran the 3rd loop well, but not as fast.  Then I was TIRED! And only halfway through.  It wasn’t until a couple miles in my 4th loop at the midway point aid station that I finally exclaimed “I’m NOT Okay.”

It’s important to give yourself permission to not be OK and voice it.  Society seems to look down on us when we don’t have our shit together.  This adds a lot of stress because not only do we not have our shit together, but we can’t even admit it and have to live this fake life of having your shit together… causing even more stress.  It’s a vicious cycle.  Pretending everything is fine gets you no where….

By finally accepting I wasn’t Okay and voicing it out loud I was able to address it and receive support from others which brings me to my 2nd point.

2. Accept help from others

Americans have an unhealthy attachment to independence so much that I think we progress slower as a society because we are not a team that works together but an independent, narcissistic, power hungry, capitalist competition machine…. But I’m not going to go down that road.

We don’t get ahead in life alone, we get help and it’s OK to get help, it’s normal to get help and hell, life is easier to receive help, so accept help from others (which can only be had by admitting we need it and we aren’t OK – see point 1).

Anywho, back to my run.  On my 4th loop after I exclaimed “I’m not Okay,” I was able to receive encouragement and support from others.  One particular runner was very helpful by giving me permission to slow down, let go of my ego goals, recover, and focus on the main goal at hand – finishing.  This leads me to my 3rd point.

I’m a stubborn person and if I’m determined I don’t let up.  This leads to things like never ending arguments with my husband if he doesn’t agree with me… I don’t let up.  The first 3 loops I was determined to get to my goal of under 7 hours clocking a pace that would get me there for sure.  After I admitted I wasn’t OK, and got support from others, I was able to be flexible with my goal and settled on my main goal of finishing.  I had to detach from whatever ego goal I had that had no bearing on my self-worth and just focus on the task at hand – finishing.  So I was still determined and making progress, but not so hard and rigid with myself.  Because as Brandon Boyd so eloquently tells us, “to resist is to piss in the wind, anyone who does will end up smelling.”  This leads me to my next point.

4. Be kind to yourself

I had to say thanks body.  You’ve gotten me this far.  You can get through 31 miles – I know it. I will help you out by walking for a while and recovering as I should have listened to you the first 3 loops when I realized the course was harder than I expected for my sub 7 hour time goal.  So I was nice to my body, and kind to myself, and my body rewarded me!  How awesome is that.

By the time I got to the aid station again where I had had my mini breakdown, I was feeling better.  My body recovered and I was back to running and feeling good again like I did in the beginning.  I had lost too much time to meet my time goal, but I finished my race and felt strong though the finish line.

By being nice to myself I was able to finish with a smile and feeling good rather than feeling defeated and unworthy. Kindness goes a long way.

So those are my life lessons from this particular 50k.  I’m really thankful for that difficult time I had during the race because I learned more about myself and the lessons I outlined above.  If everything was hunky-dory, I wouldn’t have had that experience.  It is the experience, and in those rough moments, that the learning happens and the process of overcoming that makes being human super awesome and super special.

Thanks for reading my fun random life lessons.  Not planning on running another 50k in my immediate future if you’re wondering.  Going to focus on work and family for a while, but may visit a 50k again sometime in the future. 🙂